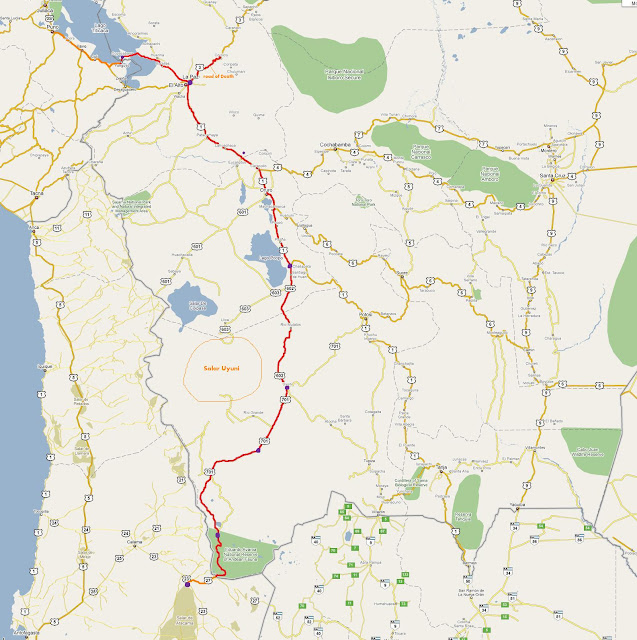 After a looong break, here we are back at blogging. It's been so long since we've posted an update, I don't even remember the last thing I said...

Crossing into Bolivia was interesting, as the border looked a lot like the ones we've seen back in Central America, and it didn't take long to be given a lecture because we parked AFTER the raised barrier. The policeman even mumbled something about us being uncivilized monkeys, which I thought was pretty ironic...After Andy (being American and all) paid $135 for his visa, and as we were getting ready to leave, we get intercepted by another policeman who wants to write down our names and bike plates numbers in a notebook. Sure, no problem... Except he then asks for the equivalent of $30 each for having done that. So we tell him half-jokingly to take our names off the list :-) The conversation got a little heated and we ended up just leaving his office without paying and ignoring his loud complaining behind us. 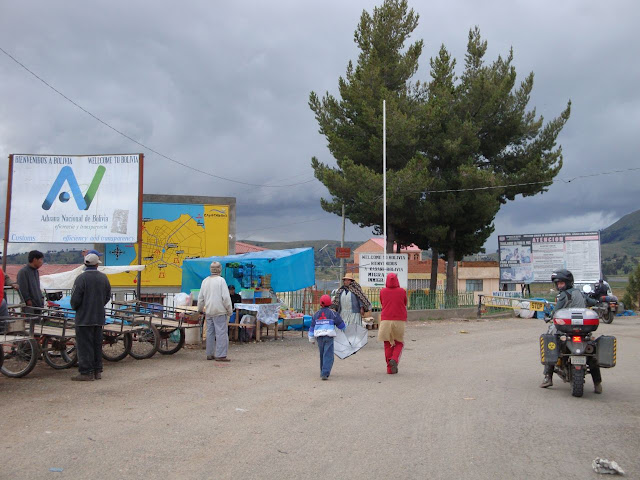 Our day was to be a short one as it was getting late and we stopped in the first town, called Copacabana. No, that's not the famous Brazilian beach, it's just a touristic town on the shore of lake Titicaca. To our surprise, as we were entering the town, Fer (the Argentinian rider we had met already a few times) rolls by on his Transalp. After a few zealous hugs we go to his hotel which had parking and was quite cheap.

After such a night, next day had to be a calm one, and we strolled the artisan alleys. Lots of cool stuff, and I don't usually like these kinds of places

We entered a music store, and I saw this amazing looking mini guitar (actually called a charango), made from the carcass of an armadillo, complete with hair. Exquisite craftsmanship, and I almost bought it, but after talking among ourselves, I realized it wasn't a good idea. First, it might not have passed customs (for whatever fucked-up reasons they have), and also, the owner - and guitar maker for that matter- said that it may not like a more humid environment than Bolivia and will eventually start to twist.

But I didn't give up and I wanted to see how this charango sounds like. So I told him to convince me to buy it by playing something so cool I won't be able to resist. So he did (see video below). 5 minutes later I was sitting outside his shop trying to figure out how on earth I'm going to fit my new charango on my already overloaded bike....


*********************************************
Next day we nervously started a day-long trip on something called " the most dangerous road in the world" It has been like that for a long time, it's a dirt mountain two-way road that barely fits a bus. Many have perished along the years, not least due to the suicidal driving style of drivers around here. Many victims aren't even recovered from the bottom, too much trouble I suppose.
When you see your bus driver doing the cross 3 times before he starts, you know you're on the wrong bus... 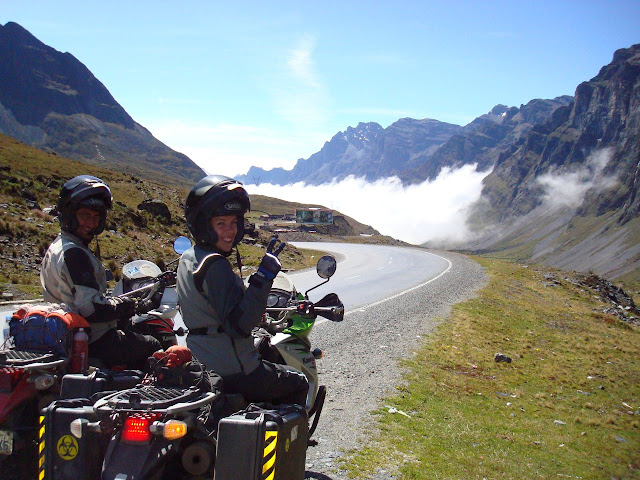 Soon the wide asfalt turned to narrow dirt. Gorgeous road! However, not a single car, except for the 4x4s carrying the bicycles of all the suicidal tourists. I called them that, because they are the ones now in the top statistics, they were just racing downhill full speed and I can see how sometimes the less experienced misses the corner...10 second drop.

Anyways, what happened is, the government finally gave in, and found the money to build a second parallel road which is paved and wide. Countless portions are suspended on mini-bridges as the mountain wall is too steep to cut a road in it. Very impressive achievement.
What's not impressive is how LaPaz tourist zone continues to be filled with banners and ads for experiencing "the most blablabla..." 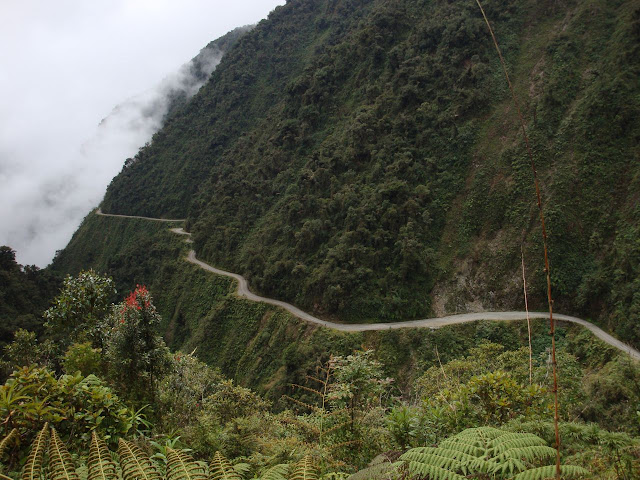 The next three pictures of me (same moment, taken by 3 different people) are some of my favourite ones in this trip 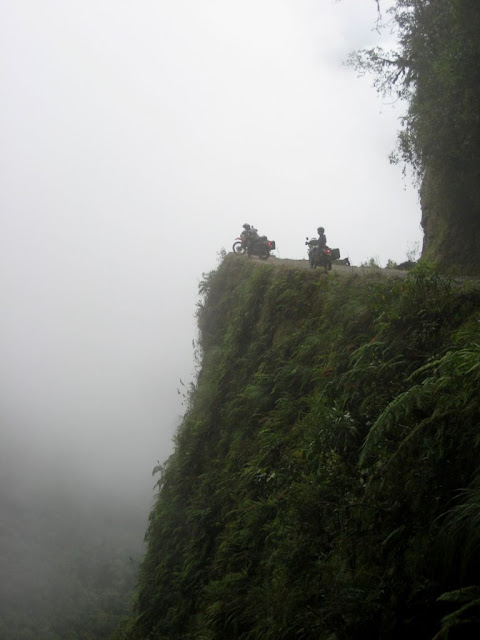 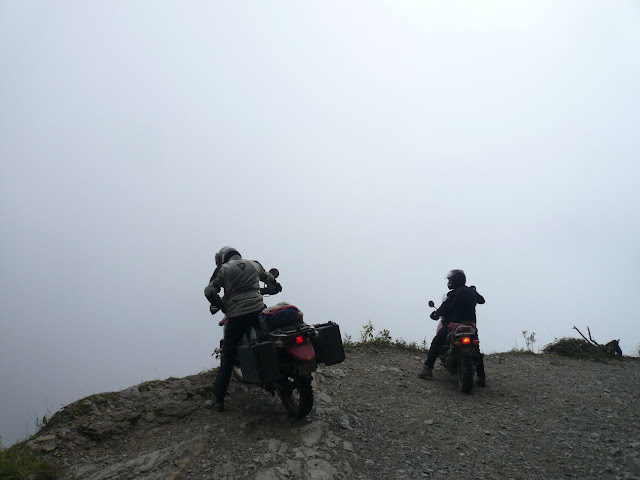 A video of the road leading to that spot (stabilized in "post-production", the original was so shaky, it was unusable)


We left uninspiring La Paz behind and headed south towards the real challenge of this trip, the one that's supposed to make or break us, according to many 2-wheel travelers. Southern Bolivia, unique, remote and reaaaaal hard to get to.

We stopped in the last town (challapata) before pavement disappeared, we knew we needed all next day to reach the salt flats of Uyuni, 200kms away.

Next day, hell started immediately, and within 10 minutes Caro had a cracked fairing (the first one so far!)
One hour later we had done 5 kms. It was so crazy we didn't even think of taking pictures. They are building a road to replace the joke they call "off-road", beside. It should be called just "Off". And the rain made things even more interesting.

Our turn to cross the river. Probably the only video with both of us...

Here's a video that illustrates the power difference between a 90's BMW and 2008 KLR650 (mine). This was naturally the subject of many smart ass comments on my expense....


We started to be more comfortable riding on this bad road, and made it more than half-way to a little town where we had something to eat.

Not long before dawn, we finally arrived in Uyuni, exhausted. The next day we had planned to ride the salt flats, but it wasn't possible until the bike was fixed, and a little break was in order, too.
I took a cab who from mechanic to mechanic, finally bounced to a welder who fixed it for $10. When I asked him if he pressure tested it, he said "what?" I guess I'll just have to trust him, what choice do I have? 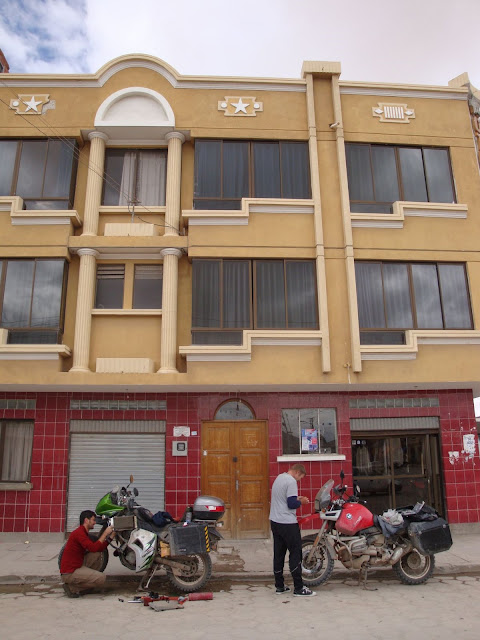 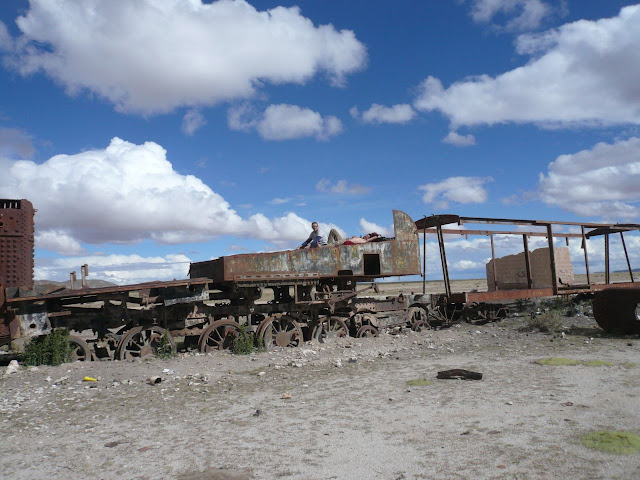 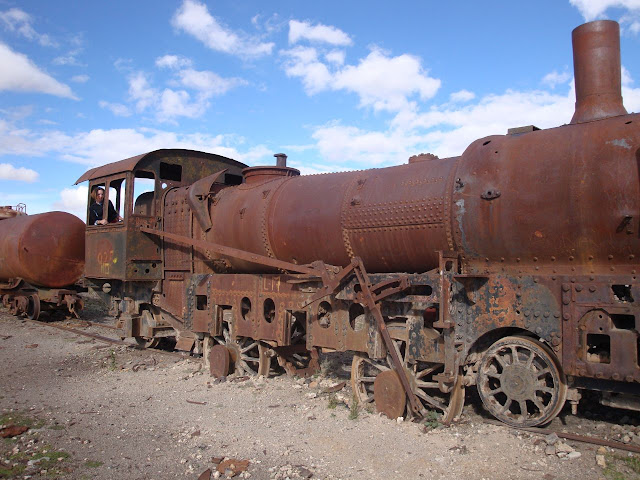 Here's another contestant, full video. The crazy thing is, the walls were filled with people that had managed to win. The best was a woman with an incredible time of 1 minute and change.

We assembled every ounce of energy, and while my head was still spinning, I declared myself fit to ride. We also took our japanese friend from last night's bar activities.

We took some even riskier shots, but we can't make them public, they have to be requested. 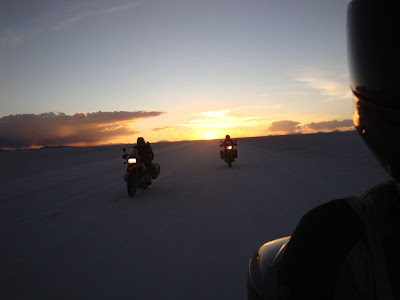 Another video, ride during sunset, from my perspective.

How do you finish such a perfect day?
By crashing...
Except this was not dumping-on-mud, haha kinda of crash.

I decided to take a few days of rest to see how my injury evolved, and Andy, who had two weeks to make it to Buenos Aires decided to hit the road. We said our farewells, hoping to see the guy again.
In the mean time, the town had all sorts of marches, it was close to national day, the day they lost access to the Pacific Ocean in a battle with Chile, "War of the pacific" 1879-1883. They also lost large pieces of land to Argentina and Brazil in similar circumstances. In total, about half of the original Bolivian territory belongs to the neighbouring countries

Then, they got really upset, trying to get back in the house! Sooo funny...
Here's the video.

After hesitations and pondering, I decided to take my X-ray and go see a specialist in a different city. I didn't want to risk it, if I had a cracked something, it could get worse.
The train ride was "only" 6 hours for about 300kms. It was slow and arrival time was unpredictable because the state of the railway was no better than the state of the roads. It was late "only" 5 hours...only in Bolivia can this happen.

To my relief the doctor said that I was fine, he gave me some more medication and sent me on my merry way.

So the next day, even though I was supposed to rest more, we decided to continue riding south.
It was easy dirt riding, and I thought hmmm, that's not too bad. We stopped in a small village where half the people had a convenience store, but they were all closed and you had to knock at their door to get what you wanted.

A short video of the endeavour.... 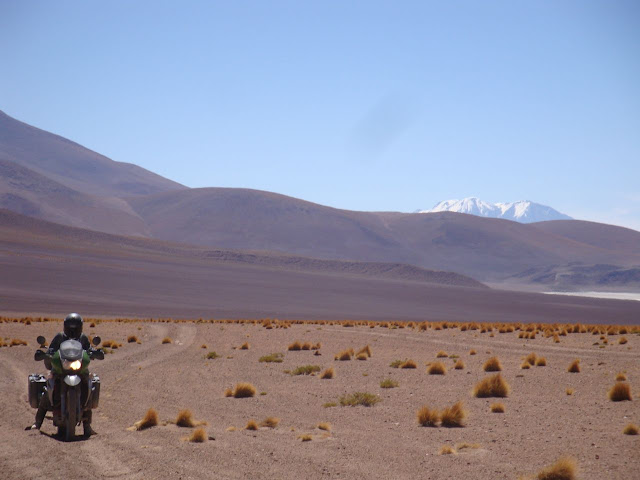 
The day's frustration reached such a point that when the park ranger asked for the $5 park entrance fee, I blew up again, all I could think of was on what exactly is that money spent on, 'cause it sure wasn't the f*cking roads. 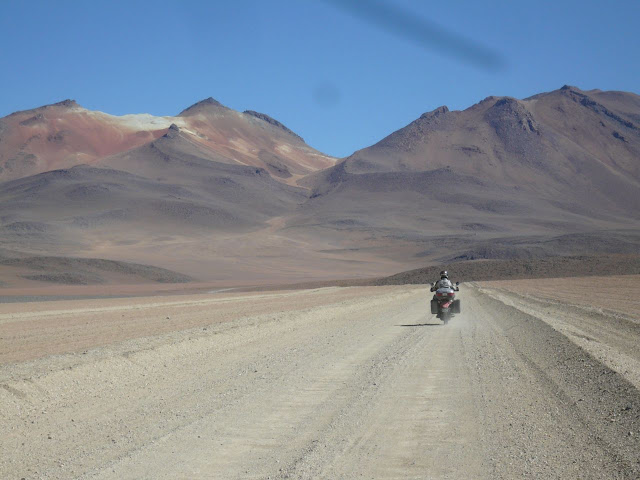 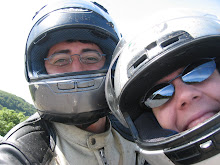 As some of you may already know, we've embarked on a big (for us) adventure: We're riding our motorcycles for 6-7 months, down to Tierra del Fuego, Argentina. We started riding Friday the 19th of September 2008 from Ottawa. You can forward the link to whoever you want. Wish us luck! Radu & Caroline